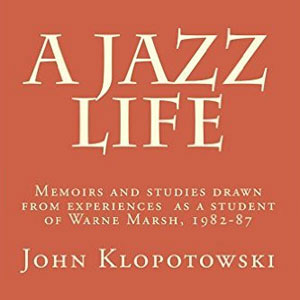 To purchase A Jazz Life in paperback, please visit CreateSpace.

Introduction to A Jazz Life

I had the good fortune to study jazz improvisation privately in New York with tenor saxophonist Warne Marsh during the years 1982-1984. These studies and period of time left a strong mark on me, and for many years I thought that both the story and information on the studies were worthy of publication in some type of book format. I eventually started writing what would become the book in 2005 and completed it in 2009.

The book consists of two parts - the first is an account of the circumstances and events that led to studying with Warne, and the second is a description of the techniques and methods used.

I wrote with a few people in mind, and the first were Warne’s two sons, K.C. and Jason. I have long wished that they could have known the Warne that I knew when I was a younger man, and I took Jason’s early advice to make my story personal. I also have always felt that I should share the material with any younger musicians who might benefit. To that end, please enjoy a free preview of the book along with purchase options for either the paperback or kindle copy.

“Having read the book, I believe it to be the most personal document on Warne Marsh, both in terms of the man and his music and the methods he used to teach his students.”
Jack Goodwin

“I think that if I had not known Warne personally, I would have come away from your book with a pretty vivid sense of him.”
Charles Coffman

“This book is a valuable addition to understanding Lennie’s ideas. As a teacher I’ve been a long time believer in “copying” (singing) as opposed to the current fashion of transcribing and analyzing solos and appreciate your reinforcement of my own beliefs. Your analysis of the efficacy of the process was revelatory.”
Hal Galper (5 star review on amazon.com)